GGO Alternative has finally ended, a week after all the anime I was keeping up with, and I have nothing but good praise for it! I’m a big fan of the original Sword Art Online but I seriously think that GGO Alternative is the best installment from this universe.

Sword Art Online: GGO Alternative is set in the video game Gun Gale Online and revoles around a new event called Squad Jam. It follows the same rules as the Bullet of Bullets Tournament; a Battle Royale except you can play with teammates. This anime has become more relevant today as the Battle Royale genre is on the rise with the games such as Fortnite and PUBG taking over the gaming scene. While Aincrad and Alfheim only scratched the surface of MMORPGs, GGO utilized mechanics and strategies that are present in battle royale games. Things such as positioning, predicting enemy paths, and even coordinating with enemy teams were all brought up. This is a treat for fans of this game genre as it makes the anime more relatable.

What I liked the most about GGO Alternative is the fact that it doesn’t feel as serious as the original Sword Art Online. SAO revolved around the difference and similarities between the virtual world and the real world. Not only that but there is always the looming threat of “If you die in game, you die in real life” even when they transitioned outside of Aincrad. 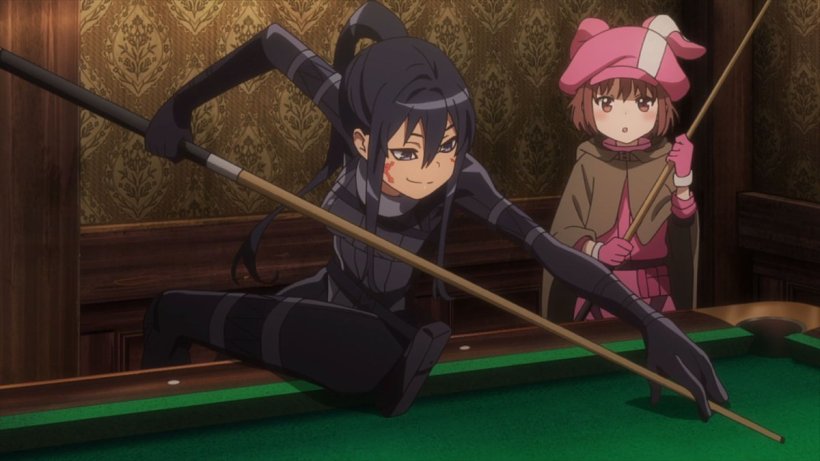 Contrarily, GGO Alternative focused more on real relationships between people who just wanted to play video games together. Sure, there was the fact that Pitohui was going to die along with M if they died in Squad Jam, but as the anime progress, it didn’t have that sense of urgency to it.

Additionally, the relationships outside of the game were very realistic. Since the game is competitive, you can’t help but start a rivalry against someone with equal skill. But outside the game, you are still friends and whatever happens in game should stay there. We recognize this as LLENN and the squad SHINC, develop a rivalry in game but a friendship in real life. There wasn’t any hostility, but the competition was still present.

The friendly but serious rivalry between Pito and LLENN was also another factor as to why this show stood out. The two facing off against each other was inevitable, but the road to it was an entertaining watch. We see as LLENN had to face multiple teams on separate occasions but on the other hand, Pito and her team had to face 42 players who made an alliance all at once. Pito’s act of massacring them in a ridiculous fashion cemented herself as a solid villain and a formidable opponent for LLENN.

While SAO tried its hardest to be taken seriously with the dangerous theme of  “death game”, GGO Alternative embraced the humorous side. The most notable case of this was the last scenes of the very first Squad Jam. From M’s mental breakdown that was far from his usual character to P-chan being able to talk to LLENN, this whole episode was what set it apart from the SAO. The asspulls were borderline comical but it has already set itself as a “not so serious” adaptation of the SAO world. After all, why couldn’t it be absurd when it is a video game from the start? It was very admirable as the show wanted to become independent from the original series while still making references of the events that happened in it from time to time. 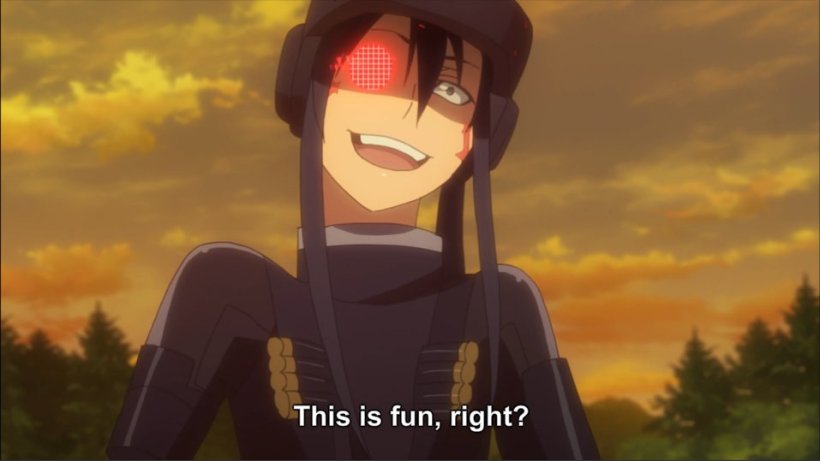 Even after all this, the action scenes should not be underestimated either. Pitohui going rampage with different weapons got me hyped two weeks in a row. LLENN speed blitzing everybody was also fun since I’m a big fan of speedster characters. The way they executed some of the players were depicted more brutally compared to the original SAO. Furthermore, the added dynamic of the game being a Virtual Reality game brought the level of intensity higher. Blood and gore are non-existent in game; we only see pixels that represent the blood, yet we can see despair in the faces of the players when they are being killed with no mercy.

Overall, GGO Alternative was a fun show to watch weekly. I had my doubts since it was moving slowly at the start but after the second Squad Jam was announced, it was reasonable. The first few episodes served as an introduction, establishing the rules and the way the event works. Since these base foundations are now laid, they didn’t have to go over it every episode and went all out on the second Squad Jam.

For the second part of the title, I will be taking a short hiatus, around 2 weeks maybe? Anime Expo is coming up next week and I plan on enjoying it to the fullest, and I have personal things that will be going on the week after. But don’t worry, it’s nothing bad!

Thanks for reading, as always~!