How could you transcend from feeling so helpless, when you weren’t given the tools to become outstanding in the first place?

Getting yourself into a predicament knowing that you can’t have any influence over what is about to unfold feels discouraging, doesn’t it? What even feels more frustrating is the fact that the people surrounding you are able to fix the problem and take responsibility for a mistake you caused in the first place. However, if you were somehow presented the opportunity to become greater or as someone competent enough to finally be able to take accountability for your own mistakes; with the exchange of sacrificing something important to you, would you be willing to take it?

In Houseki no Kuni, the show with beautiful visuals and waifu-esque characters, it uses underlying dark tones while also dealing with these questions. It tells the tales of immortal life forms known as gems. (These gems are genderless so I shall be refering to them with the they/them pronouns). Although they are peaceful, they live in fear of the Lunarians, foreign invaders from the moon who hunt the gems and take them back to the moon as luxurious decorations. In response to this, each gem is assigned a job to stave them off. Phosphophyllite, or Phos for short, was the youngest and weakest of all the gems, yet they wanted to help out their fellow comrades. However, because of the fact they are more fragile compared to the rest, what exactly can they do to assist the other gems that are far more superior? This doesn’t stop Phos from trying to become useful though. Instead of staying idle and letting their friends do all the work, Phos tries to find ways to be some sort of use to the rest. Unfortunately, this proved to be more harmful than aiding

Phos got involved in serious accidents that caused trouble for the rest of the gems consistently.

Even though it was all Phos’ fault, the other gems took responsibility upon themselves and steered the blame away. Phos was left feeling weaker than they previously did, knowing that they couldn’t have done anything to revise what ensued.

There were two examples that stood above the rest throughout the show. The first one was when Phos got teamed up with the Amethyst twins for a patrol shift. After having their legs taken out in the sea and replaced by parts of Aculeatus’s shell, Phos gains the power of speed. Are they finally useful for battle? The moment that Phos has been waiting for has arrived; The Lunarians came yet Phos froze in fear. Even with the legs they were given, they were still useless and as a result, the Amethysts almost got taken if Bort didn’t come to the rescue. Phos felt responsible for being unable to assist the Amethysts from being captured. Yet after the Amethysts got put back together, they still took responsibility for the situation even though it could have ended worst. Even with the newfound powers, Phos was exposed to the truth that they are still powerless.

The second one was more tragic and it happens right after the incident with the Amethyst twins.  Winter is coming and while the gems usually hibernate during this season, Phos decided to stay up. They still feel massive guilt over the Amethysts nearly being captured by the Lunarians and can’t seem to dispel it from the mind. As a result, they were paired up with Antarcticite, who is in charge of dealing with winter while the rest of the gems are asleep. While working on taking out ice floes, Phos loses both their arms. Antarcticite takes all the blame even though Phos was fully responsible. 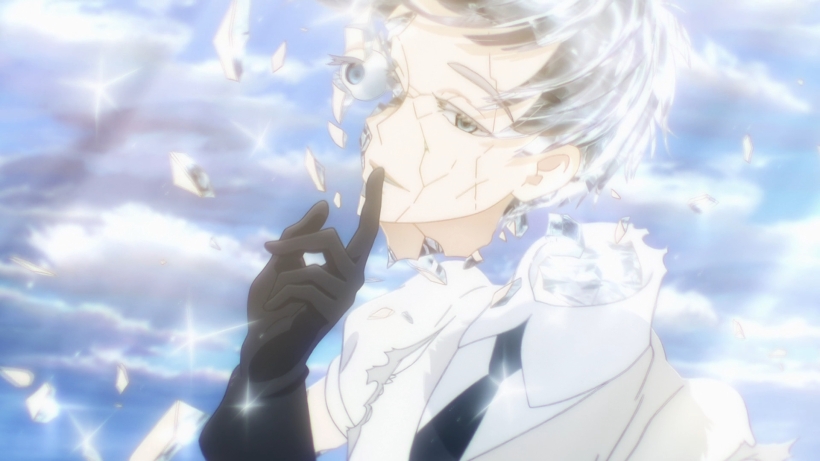 Antarcticite and Phos now have to go to the Chord Shore to find a replacement for Phos’s arms. They find gold and platinum alloy and attach it to Phos. Unfortunately, the alloy decided to merge with Phos and with even worse luck, the skies clear and the two are greeted with a surprise attack from the Lunarians. Antarcticite attempts to fend them off while Phos was engulfed in the alloy. After Antarc’s was successful in repelling the attack they try to get Phos out of the cube the gold alloy made. With another stroke of bad luck,  they were attacked again by a second wave of Lunarians. Phos, once again, unable to help as Antarc breaks into pieces. Even in their last moments, Antarc signaled Phos to remain silent and to protect the rest of the gems in their deep slumber. 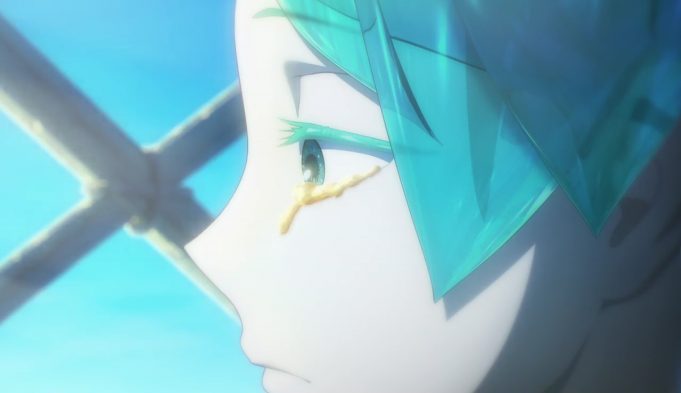 Throughout the show, we watch as Phos is consumed by a sense of hopelessness and despair. Moreover, due to more unfortunate events they lose fragments of themselves but gaining power that they have long desired. That is the beauty of Houseki no Kuni. In exchange for character development, Phos had to lose in order to obtain it.

You can see the obvious difference between who they were initially: Phos started out really useless, their skills overshadowed by the rest of their peers. Yet their personality made up for it. They were a ball of sunshine, always full of energy, filling in the role of the youngest sibling to everyone. But as more fragments of themselves chipped off and replaced by parts that made them stronger, so too did their personality and the memories they held dear. It has gotten to the point where it hurts to see Phos look broken beyond repair after all the trauma they have experienced. Phos can’t even sleep at night as Antarcticite being taken away by the Lunarians haunts them. 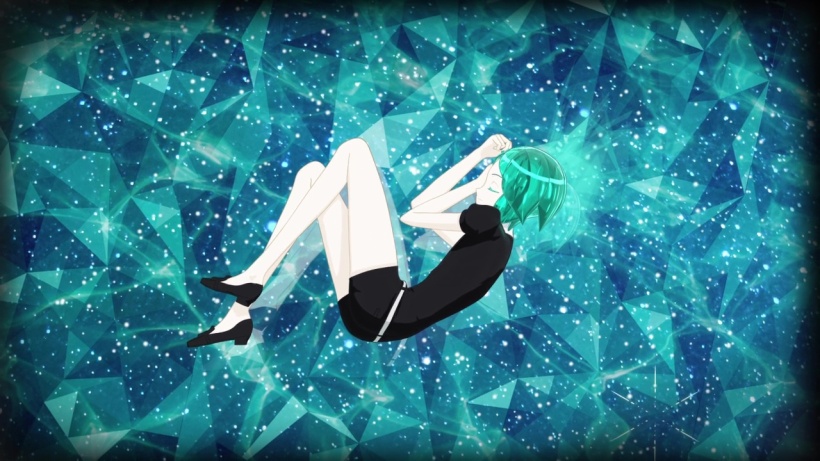 Was everything they gave up worth the power they gained in the process? That was their goal from the start, right? To be able to keep up with their fellow gems? They may not feel frustration over their past sense of incompetence anymore and the gems may see Phos as someone reliable now, but is it worth living in a shell of their former self?

One thought on “Frustration From Feeling Powerless: Houseki no Kuni”